WE SHOULD ALL BE CONCERNED ABOUT BEES... 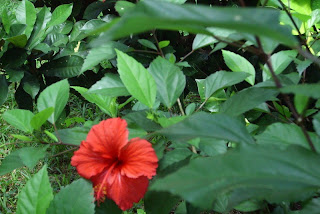 Cultivating gardens,planting flowers and not using harmful pesticides is one way of ensuring bees survive... pic by F Macha

The earliest memory I have of bees is my mother yelling at me to lie flat on the ground in rural Kilimanjaro.  I must have been seven or eight. Swarms of bees would noisily zoom past like tornadoes. At that time I never associated bees and the sweet stuff they naturally produce.
The notion that bees are vicious insects that bite was as common to us villagers as were stray dogs and wild animals.
Ten years later (now a teenager) I was writing stories and poems and one was about the fierceness of bees.  I was, by then, aware that bees made honey and that honey was good for you. However, the idea that they were dangerous could maim even kill, dominated social values.

WHAT HAS SYMBION POWER, SUNDERLAND AFC AND PRESIDENT KIKWETE HAVE IN COMMON?

It is Sunday late afternoon. 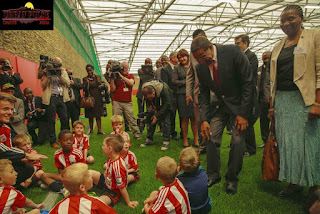 President Kikwete with kids at the Academy of Light....on his left is the Minister of Information, Youth, Culture and Sports, Dr Fenella Mukangara...pic by Urban Pulse.

I am standing a few meters away watching BBC journalists, Sophie Ikenye (Kenya) and Charles Hillary (Tanzania) interviewing President Jakaya Kikwete, in Sunderland.  Sunderland might be as unknown to some as Lindi, Naivasha or Soroti, is to non East Africans...yet it is a word   connected to Tanzanian sporting history. Back in the 1930s as President tells Sky TV later, Simba Sports Club was formed and adopted various names including Dar Sunderland until 1971 when Simba became permanent. Back then we Swahilised the title to Sanda...
Well. Not only Simba (Sanda) possessed “unusual” names, Young Africans (Yanga) was nicknamed Kuala Lumpur...
So we are in Sunderland, New Castle.
Read more »
Posted by makala zangu at 17:07 No comments: 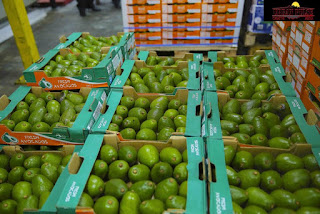 Picture this. A huge table. Around eleven in the morning.  People of all nationalities are seated listening and watching one of the speakers holding a small thin mango. If you are a child it might look as though the man is fondling a beautiful toy. Tantalizing and mouth watering the mango is quite ripe. Usually it would cost you around three thousand shillings here in London. The price in Tanzania is much, much less than that. High season Embe Sindano? A mere hundred to three hundred shillings. Probably just 500 for low season.
“I can get you better mangoes than this” the medium built man says dead pan. By the tone of his voice, the contours of his calloused hands and his relaxed demeanour we can say (and conclude) he knows what he is talking about. Photographers in the room and journalists are taking in everything he is saying. Looks like an historical occasion.
The man who we have been told has a farming background picks up a bunch of sweet bananas (“kichani cha ndizi kisukari” in Swahili) and with that similar mix of positive arrogance, experienced and relaxed composure declares:
“We can provide you better bananas than this.”
What does he mean by better?
“Thicker, bigger and sweeter.”
Read more »
Posted by makala zangu at 17:26 No comments:

IDENTITY CRISIS PART OF THE PSYCHE BEHIND WOOLWICH ATTACK

For days now almost everyone has been talking about last week’s killing of a young British army guy at Woolwich, south east London. Most were shocked and appalled at the same time. Discussions about the whys and whatnots have been the theme.  Views range from blaming policies of the big nations Vis a Vis Israel and the Palestinians to presence of soldiers in Afghanistan, to religious extremism, ad infinitum...


And speaking of the elephant in the room, i.e. religious extremism…
Read more »
Posted by makala zangu at 16:59 No comments: 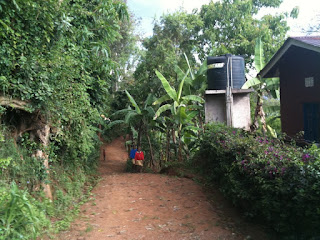 I recall while in secondary at Ilboru, Arusha where numbers of Maasai children was high, fights among us boys due to teasing were frequent. Mostly they were resolved verbally, but at times ended in dramatic formal duels. When one of these clashes occurred we would cluster around a circle to watch. One of the memorable ones was between a Hehe teenager and a Maasai. Hehe boys were few at Ilboru as they were from a far away Iringa region while Maasai being the majority tended to be cocky and proud. You did not mess with Maasai (or Waarusha), this was their homeland. The word for non- Maasai person “Ol Meeki” was freely used (just like we Chaggas had “Kyasaka” for a similar description).
On this late afternoon the Hehe warrior, unsmiling and valiant faced his adversary supported by a frenzied and partisan crowd.