MAJOR SPORTING EVENTS AND THE QUEST FOR POLITICAL MILEAGE...

Last week former heavyweight champion and one of the most famous personalities in the world, the African American, Muhammad Ali celebrated his 70th birthday. For a whole week London’s ITV beamed one hour documentaries of his fights called “Ali Still the Greatest.” 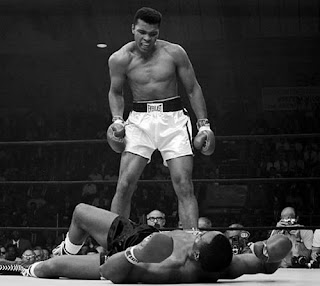 Ali floors Liston in their second match in 1964. Pic from here

Among Ali’s best tournament was 1974  “Rumble in The Jungle” where he faced George Forman and beat him in the eighth round in Kinshasa. The contest was so interesting that it has nurtured two finest films:  “Soul Power”, featuring musicians who performed at the event : James Brown, Miriam Makeba, Luambo Makiadi, Tabu Ley, BB King, Bill Weathers, etc. Dubbed the “the black Woodstock”, by Wikipedia, “Soul Power” was launched in 2008 and has amazing music from especially Miriam Makeba, Mama Africa, who died after performing in Italy, the same year. 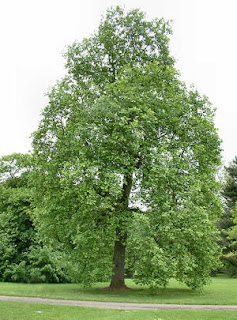 I had just passed a disgusting, smelling, large chunk of dog’s diarrhoea under a Poplar tree. Poplar trees are part of London’s green vegetation. Next to bees, trees are our best allies. Trees help make a city ( like this) replete with smoke fumes and smog,  petrol and diesel fumes,  industrial waste and general pollution by absorbing carbon and giving us oxygen. Without trees life on earth would indeed, sleep.

Poplars, however, can also be destructive as their long roots (growing up to 40 meters) may damage houses.
A few years ago I was puzzled to see long, meandering cuts appearing in almost every single wall of my London flat. I remember feeling petrified and confused when the land surveyor blamed the splits on Poplar trees in my garden.
“But they are so beautiful.” I protested.
“No,” warned the surveyor, “they have to go!”
“What about the birds and squirrels who sing from those trees every day?”
There was no compromise. Lose the Victorian house or demolish two Poplar trees.
<--more--!>

THE LIFE AND COURAGE OF CANCER VICTIM NICOLE DRYBURGH 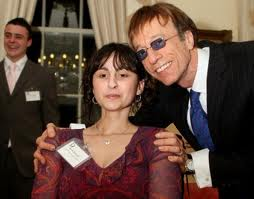 
May 2010 saw the death of cancer victim Nicole Dryburgh.
News of the 21 year old young English woman was not widely spread and very few of us including myself had been aware of the deceased previously. Recently BBC London showed a documentary of Nicole as she braved herself against a disease which had left her paralysed and incapable of seeing or hearing. Yet in her ten year battle Nicole managed to raise 100,000 pounds for Teenage Cancer Trust, published two books, had her own website and won numerous awards.
<--more--!>