ALL PICS BY URBAN PULSE...

It was a cold evening in London; as chilly as can be during this blistering winter; but here she was smiling and raising a toast to Tanzania. In a few weeks she will not only be breathing the hot air of Dar es Salaam, she will be representing her country in the equatorial towns Tanzania: land of Kilimanjaro, Serengeti, Sunshine and Zanzibar. 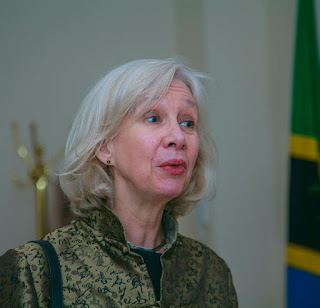 To Dianna Melrose (pictured, addressing the London dinner), being an envoy in warm tropics is nothing new; she was UK ambassador to Cuba from 2008 to 2012; in fact she was born in Zimbabwe (told me she respected Mwalimu Nyerere’s stand against the racism of those years) went to school in the UK studying languages at King’s College where she graduated with Honours in Spanish and French. Translating job evolved to a stint with British Council then Oxfam the international organisation slogging away in approximately 90 countries. This was in 1980, a minor but significant detail in a chain of exciting vocations and positions. 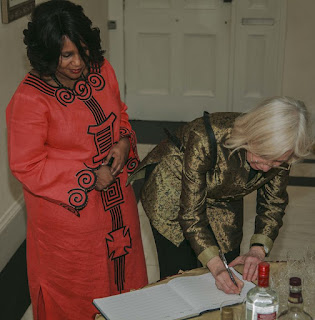 In her globe trotting life Ambassador Melrose has been involved in all manner of progress and nation building. Most times as a team’s leader- policy head, and so on...You get the picture? Who better suited to work in far unknown Tanzania?
“Lucky me,” she confessed at the end of her humbling speech, during a small dinner hosted by our man in London, His Excellency Peter Kallaghe and his equally regal wife, Joyce. The word “luck” was uttered in a context. Rather than thinking she is going to a continent of problems (wild Africa, crammed with elephant poachers, religious extremists, starving children, you see what I am getting at?)  She is thinking positively. High Commissioner Kallaghe had a good word to describe the sentiment. Challenges. Tanzania and the continent “shall present challenges.” But taking into account this is a lady of many experiences- Dianna regards the new posting as an opportunity. 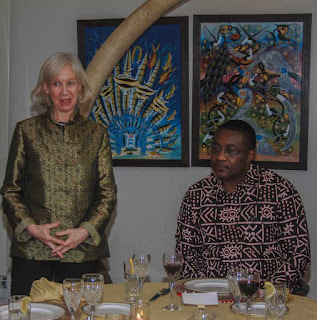 Ambassador Melrose flanked by HE Peter Kallaghe.
Read more »
Posted by makala zangu at 21:29 No comments:

CALL FOR TANZANIAN BLOGGERS TO BE ORIGINAL AND INVENTIVE

The blogging phenomenon kicked off in late 1990s- but in Tanzania was picked up by news reporter Ndesanjo Macha -a decade ago.  As Ndesanjo (pictured below) campaigned tirelessly for Swahili blogging, running workshops and attending world wide conferences while maintaining hold on his Jikomboe blog very few understood the meaning of the word, let alone using the internet as feverishly as today. Those days, Ndesanjo confessed he was blogging for love arguing this was the future of global communication.
Other local bloggers started getting noticed after the vicious murder of a Tanzanian couple  in the USA  September 2006. Suddenly we were dependant on Michuzi and internet Radio Butiama to get information that was not readily available on mainstream media.  I personally began blogging in 2007.
How things have changed since! 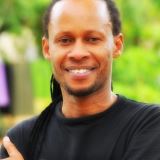 Ndesanjo’s Jikomboe site is no more; he is currently, leading contributor (with over 4,200 posts) of the interactive Global Voices.  Last year he was named “Africa blogger of the year.”
Meanwhile, Tanzanian bloggers are flourishing with diverse themes, as well as social networking sites such as the influential Jamii Forums, created in 2006. Some are  educational –e.g.  Award winning Mwanamke Na Nyumba (openly discusses sexual problems) and Al Hidaaya analyse different aspects of the Quran.
Sites  have mushroomed in hundreds. And within this ascent are big bucks.   Whispers that certain bloggers are earning as much as ten thousand dollars a week might be exaggerated but companies are using blogs to reach their markets. This has made Tanzanian blogs (specifically) hard to scroll through as pages are crammed with massive advertisements.
Read more »
Posted by makala zangu at 20:34 3 comments: