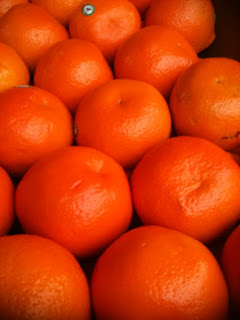 A DINNER FOR BUSINESS , PROFESSIONAL AND INVESTMENT CONCERNS...

If you were to enter the well furnished room you would be facing a bunch of well dressed people feeding on Indian food.  They might remind you of well off Third World executives in Europe. Photographs from the Holiday Inn last Wednesday might be dismissed as those typical casual hedonistic dinners.
Holiday Inn is a world wide franchise with over 1,300 hotels catering to 100 million guests every night. This particular one in Brentford, West London a few kilometres from the international Heathrow Airport, however had a different twist. 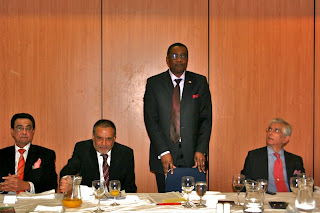 Hon Kallaghe speaks, on his right is Chairman, Kamu Khaki- Pic by Rashid Dilunga
Various professionals and the hosts, UK-Tanzania Business Group, gathered to hear guest speaker, Ambassador Peter Allan Kallaghe. He was once personal assistant on foreign affairs to the former President Benjamin Mkapa for six years then represented the country in Cuba and Canada till they brought him to London recently.
“London is dynamic and intense,” he told his audience, all sipping water or orange juice.  Most fled during the Ujamaa era.
<--more!-->

When people  die we tend to focus on their good sides and forgive the horrible.  Adam Lusekelo made us laugh and think at the same time. He was one of the funniest, cleverest guys. No wonder when I heard his passing, instead of tears I reflected on his jolly character.
Last time I sat with Adam at Nyumba ya Sanaa (May 2009) with blogger Michuzi muffling down Ugali (while avoiding chocking himself with laughter); the humorous columnist kept blowing his nose starring disgustingly at his handkerchief.
"That is a lot of snort,” he said grinning; it was his way of mocking his disease.

Yes. Adam had diabetes for many years, he was thin and I could not believe how emaciated he had become. 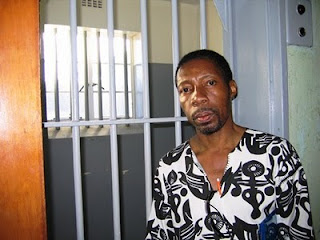